The Abbey of San Galgano lays ca. 30 km far from Siena in the town administration of Chiusdino.

This site is composed by the “Rotonda di Montesiepi” and the great abbey, of which only the wall remain and is one of the most enchanting places of Tuscany, where many weddings take place.

We know about San Galgano that he died in 1181 and that he became a monk in 1180 after a very turbulent youth. In that moment he reached the hill of Montesiepi and put his sword in the earth, by letting it become a cross. The sword in the rock is still visible today and reminds us of King Arthur’s legend.

In the place where San Galgano died a chapel was erected that became a monastery and then it became an Abbey.

1262 the Abbey of San Galgano was already active but in the following years it entered in a phase of decay and at the end it was left apart. In the first years of the XX century it was rediscovered and restored but not rebuilt.

The complex of San Galgano can be visited with a nice walking tour until the sword in the rock. The small restaurants along the road and the amazing landscapes offer the right scenario for a very nice journey that also kids can enjoy. 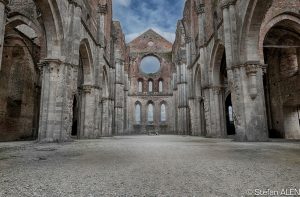