The foundation of the Castle of Meleto took probably place around year 1200 although it played a great role in history around year 1500 during the wars between Florence and Siena. The castle became fundamental for the Lega di Gaiole and was unconquered for centuries.

During the XVIII century, after the wars, the castle became a villa and at that time the magnificent theatre that is still visible inside was built.

Now the castle does not belong anymore to the Ricasoli family but it’s part of a specialized farm in production of Chianti Classico Wine and it can be visited by paying a ticket.

The guided visit inside the Castle of Meleto lasts ca. 30 minutes and it enables the access to the furnished rooms with ancient frescos of the Noble Floor and to the XVII century theatre, with a final entrance in the historical cellars.

The visit is also very interesting for families with children.

Times of the visits: 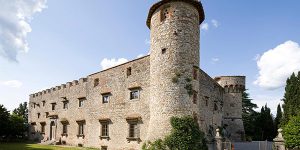